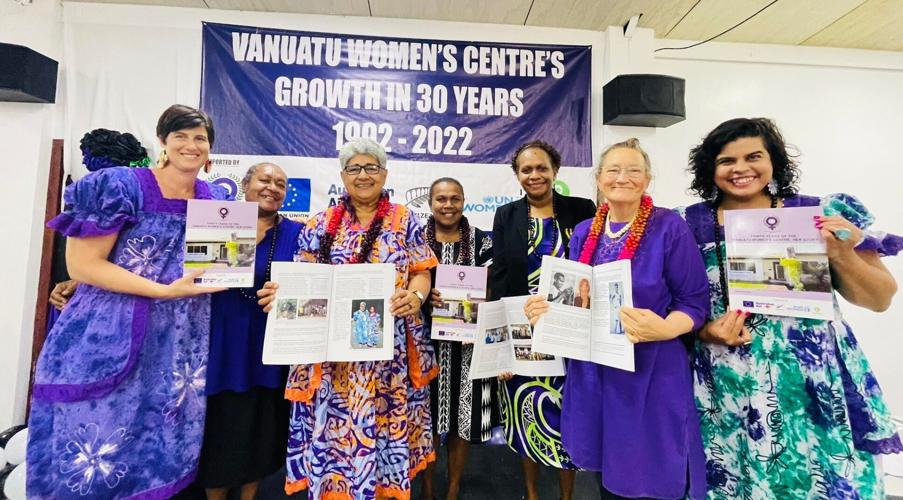 Sixteen women have been commemorated with medals by the President of the Republic, Nikenike Vurobaravu, marking the 30th anniversary of the Vanuatu Women’s Centre (VWC) yesterday. These women included the Coordinator of the Fiji Women’s Crisis Centre, Shamima Ali, the co-founder of VWC, Merilyn Tahi, and women running the VWC’s branches throughout the islands.

This celebration also involved Ali, in launching the book, ‘Her Story’, revealing the history of VWC through its 30 years. She said she has been in association with the organisation since its establishment in 1993. Ali said both Tahi and her, have assisted and supported women nationally, by ‘training’ and ‘mentoring’ them and sharing ‘strategies’ over the years, through the support of the ‘Pacific Women’s Network Against Violence Against Women’, which was founded in 1992. She said this has been a long-term relationship in building women, women’s rights, and gender-based equality in Vanuatu, which has resulted positively where the male advocacy program, has come to promote women in the working industry.

“That is why we have come to celebrate that people have taken ownership and say this (gender-based equality) is wrong and we have to do something about it,” said Ali. She said according to a survey, two-thirds of women in the Pacific suffered from ‘intimate partner violence, which also included Vanuatu. Ali also stressed that there is a lot of work that needs to be done with the young men in society, to change their mentality in securing the safety of women and girls. She said the purpose of this nature, with about 13 countries across the Pacific that have opened up centres, is to end violence against women and girls in the Pacific. Ali also said that there are training programs offered in Fiji, which helped a lot of police officers, government workers, judiciaries, churches, and non-government organisations, where Vanuatu is no exception.