More dialogue on addressing Violence Against Women and Girls 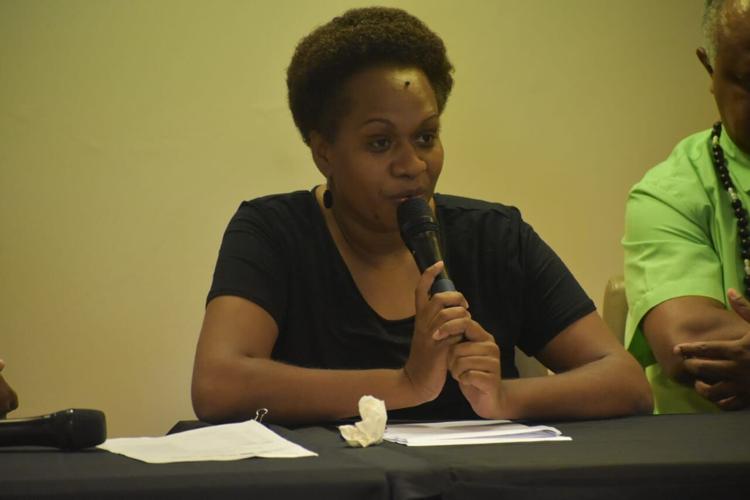 A dialogue held recently at The Grand Hotel, on Ending Violence Against Women and Girls (EVAWG) highlighted inputs from different stakeholders on the urgent need to end all forms of violence against women and girls in Vanuatu.

Different questions were put forward to five panelists representing the government, civil society, and communities, on what and how their institutions are addressing the issue.

“The Government needs to ensure there is adequate resourcing of essential services including justice, health, police, and counseling at the national and provincial level, especially in the rural areas,” Matas said.

She called for stricter penalties to be enforced by the government for perpetrators of violence against women and girls, and also noted that the Penal Code and Family Protection Act needs to be reviewed.

The Commissioner of Labour, Murielle Meltenoven admitted the sad reality that sexual harrassment in the workplace is experienced by women and girls at all levels of society.

According to her, a recent survey conducted by the Sista has revealed that sexual harassment is widespread, it causes social and health issues, and prevents women and girls from earning an income.

The Labour Department has made effort to ensure this situation is addressed specifically for women who are participating in the seasonal work programs. They have developed activities including the ‘Famili I Redi’ and ‘Family Farming’.

“We need to provide safe working environments to ensure we meet our human rights commitments and support the social and economic development in Vanuatu,” she said.

On the question of how chiefs can prevent and respond to violence in Vanuatu, Chief Alicta Vuti stressed that with no police presence in many communities, it is the chiefs that play an important role in resolving social matters.

Ms Georgilla Worwor who represented the youths, reminded everyone that the youths make up the biggest percentage of the country’s population.

“We need to ensure the voice of youth is included in planning, designing, implementing, and evaluating ending violence against women and girls’ programs,” she said.

The government has just reviewed and launched the National Gender equality Policy for 2022 to 2030 and Ending Violence Against Women and Girls is a priority as it is linked to the National Sustainable Development Plan.