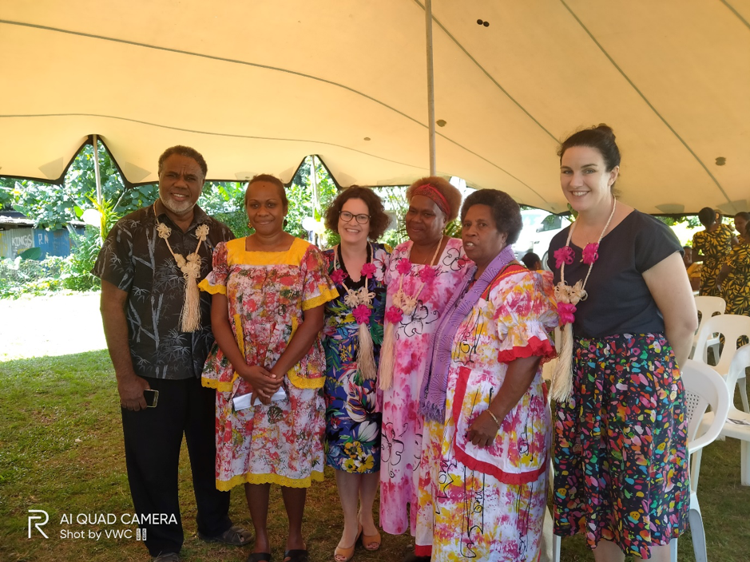 Vanuatu Women’s Centre (VWC) held its 28th Year Anniversary on Wednesday the 2nd of September 2020 at the VWC Headquarters at No.2 Area, Port Vila.

In her official remarks, High Commissioner de Zoeten acknowledged VWC’s important work as well as the need to avoid the devastating effects of violence against women and children on families, communities and the development of a country.

The High Commissioner said Australia was proud to be a long-term partner to the Vanuatu Women’s Centre and pledged the Australia’s ongoing commitment to helping the Government of Vanuatu and VWC to ensure the safety of women and children.

VWC started its operations back in 1992, after three women — Mrs. Merilyn Tahi, Mrs. Elizabeth Mermer and Ms. Janet Boedovo — were sent to Fiji to a Pacific Regional Meeting and the idea to start VWC came about.

One of the co-founders of the organization, Mrs. Elizabeth Mermer spoke these words with tears of joy, “We as women, were not allowed to stand up and talk in front of community and others back in the days. If a woman stood up to talk, she will be ushered to sit back down and let only men talk. The challenges that we faced taught us to be stronger and more vigilant in our job.”

VWC has broken down barriers in most communities by allowing women to stand up and talk about the Domestic Violence issues that was happening in our communities.”

This year has been a very challenging year for the Centre. VWC decided to take their Mobile Counselling Service to the communities which were greatly affected by Tropical Cyclone Harold and volcanic ash fall. The mobile counselling sessions conducted showed that a high rate of women still suffer from Domestic Violence in rural areas.

The VWC continues to advocate against violence against children throughout Vanuatu. The VWC has five Sub Centres in each province, 38 local Committees against Violence against Women (CAVAW) around the country and employs over 50 staff.